Interesting facts about the continent of Latin America 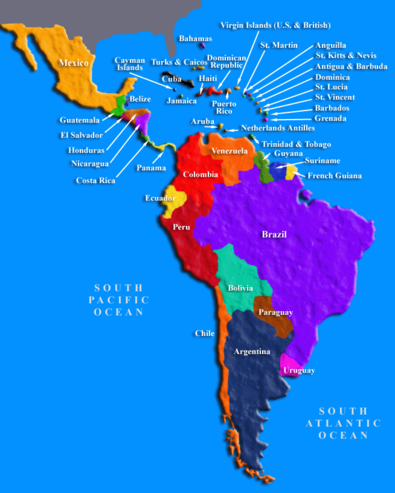 Welcome to the Continent of Latin America College Page

Latin America is a group of countries and dependencies in the Western Hemisphere where Spanish, French and Portuguese are spoken. The term originated in the French government in the mid-19th century as Amérique latine to consider French-speaking territories in the Americas (Haiti, French Guiana, Martinique, Guadeloupe, Saint Martin, Saint Barthélemy) along with the larger group of countries where Spanish and Portuguese languages prevailed. It is therefore broader than the terms Ibero-America or Hispanic America​.  Latin America consists of nineteen sovereign states and several territories and dependencies which cover an area that stretches from the northern border of Mexico to the southern tip of South America, including the Caribbean. It has an area of approximately 19,197,000 km2 (7,412,000 sq mi), almost 13% of the Earth's land surface area. As of 2016, its population was estimated at more than 639 million and in 2014, Latin America had a combined nominal GDP of 5,573,397 million USD and a GDP PPP of 7,531,585 million USD​