Pennsylvania, officially the Commonwealth of Pennsylvania, is a state located in the northeastern and Mid-Atlantic regions of the United States. The Appalachian Mountains run through its middle. The Commonwealth is bordered by Delaware to the southeast, Maryland to the south, West Virginia to the southwest, Ohio to the west, Lake Erie and the Canadian province of Ontario to the northwest, New York to the north, and New Jersey to the east.  Pennsylvania is the 33rd-largest, the 5th-most populous, and the 9th-most densely populated of the 50 United States. The state's five most populous cities are Philadelphia (1,567,872), Pittsburgh (303,625), Allentown (120,443), Erie (98,593), and Reading (87,575). The state capital, and its ninth-largest city, is Harrisburg. Pennsylvania has 140 miles (225 km) of shoreline along Lake Erie and the Delaware Estuary.[8]

The state is one of the 13 original founding states of the United States; it came into being in 1681 as a result of a royal land grant to William Penn, the son of the state's namesake.  It was the second state to ratify the United States Constitution, on December 12, 1787. Independence Hall, where the United States Declaration of Independence and United States Constitution were drafted, is located in the state's largest city of Philadelphia. During the American Civil War, the Battle of Gettysburg was fought in the south central region of the state. Valley Forge near Philadelphia was General Washington's headquarters during the bitter winter of 1777–78.​

Interesting facts about the state of Pennsylvania

Welcome to the state of Pennsylvania College Page 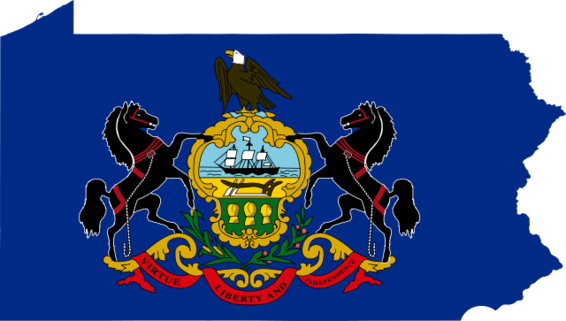 Apply for College with the

Click below for additional information on Pennsylvania Public Universities and Colleges